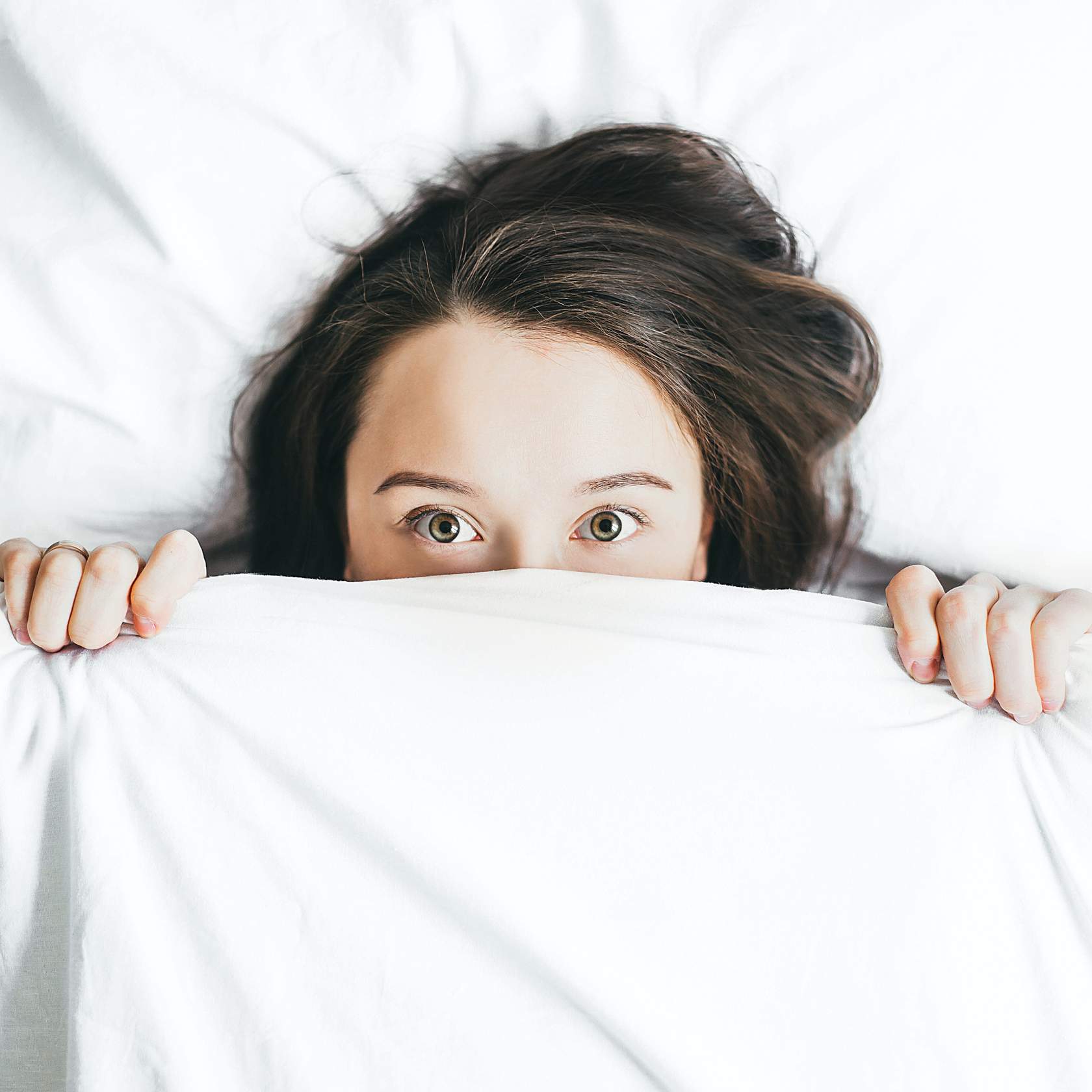 EEG: DAYS OF THE FUTURE PAST

WHAT IS EEG: YOU ARE ELECTRIC

fMRI BOLD- you are a magnet

Since everyone with a high-speed internet connection is ‘doing research’, let me disclose that I am not a sleep medicine professional.

However, I have been very fortunate to learn from people (actual researchers), who are very well versed in this domain. It is their work that inspired me to write a piece on sleep, with something that hopefully approximates a degree of scientific accuracy, relevant to my understanding of human physiology

EEG: DAYS OF THE FUTURE PAST.

The ‘godfather’ of EEG research, Hans Berger, was the first one to report the discovery of brain electrical activity in humans as measured by the electroencephalogram in 1924 (Berger, 1929). We have since enjoyed an unprecedented uptick in scientific and clinical applications of EEG. Courtesy of ongoing research and several milestones which allowed to determine the safety of this non-invasive technique, the use of EEG has proliferated and spilt-over into other areas outside of the medical realm. In fact, wearable EEG devices are now beginning to become commercially available for users worldwide (De Zambotti et al, 2019).

WHAT IS EEG: YOU ARE ELECTRIC.

EEG, or electroencephalography, is a non-invasive technique allowing to study brain function in the form of electrical brain activity. Scalp electrodes are placed on the subjects forehead in order to record electrical events. In contrast to intracranial EEG,  commercially available wearable EEG devices do not necessitate the use of electrodes to be placed directly on the exposed surface of the brain. Instead, the oscillation of cortical currents is measured several centimeters below the scalp. High quality non-invasive EEG devices are able to record brain activity while mitigating the interference of multiple resistive layers (most notably, the skull) which could otherwise have a blurring effect (Burle et al. 2015)

Brain waves, or more accurately, neural oscillations can be conceived of as synchronous, repetitive patterns of neural activity.  Raw data from EEG allows you analyze how those patterns (measured in units of Hertz) occur across time. The oscillations are characterized by frequency range and are grouped into corresponding bands, which allow the researcher to determine relevant brain state with a high degree of temporal accuracy (measured in milliseconds). When segmenting the ever-changing electrical brain signals into relevant categories as a way of characterizing brains states, one need to be mindful not to neglect their graded dynamics (Libourel et al. 2015), however this is beyond the scope of this article. 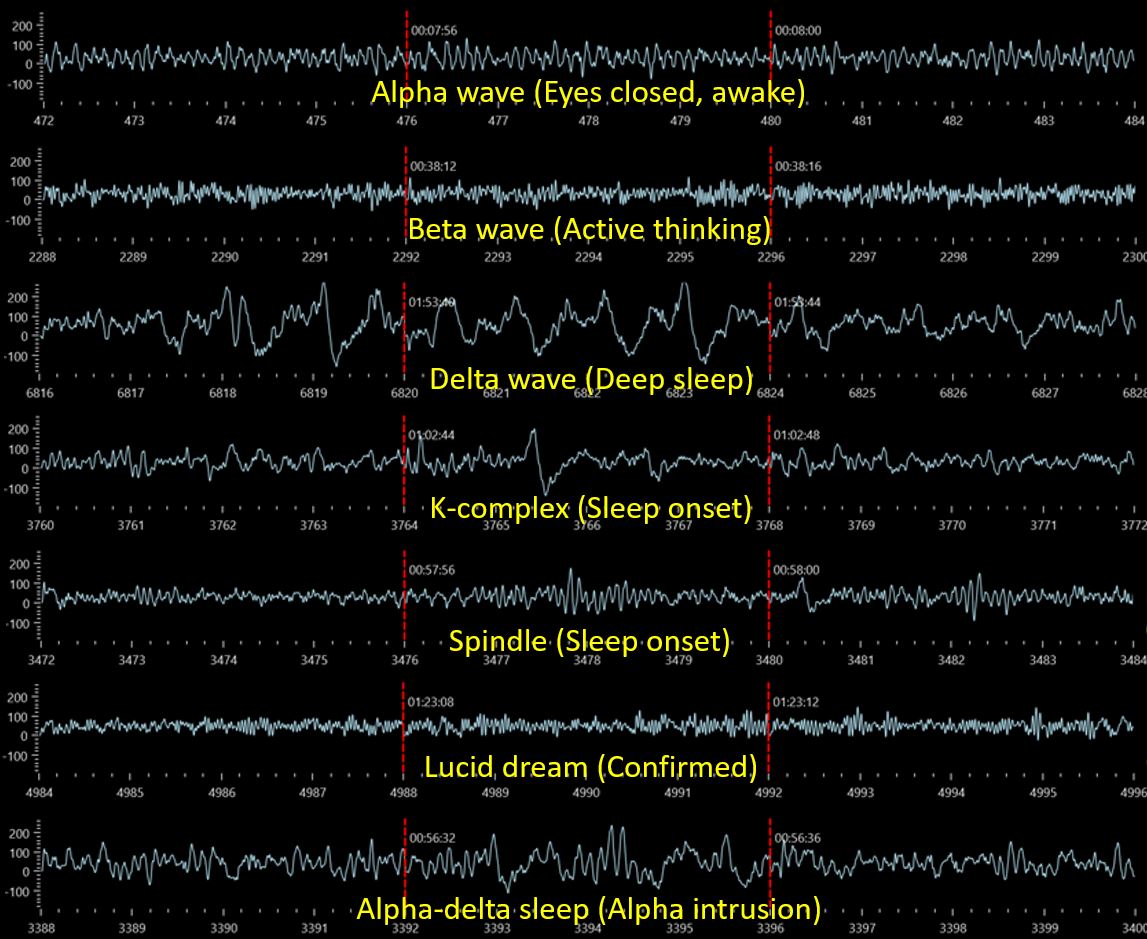 No problem: grow up.

In his book, ‘Why we sleep’, Dr Matthew Walker, painted an interesting analogy depicting EEG as a microphone dangling in the middle of a stadium; what follows is my own take and extension of this concept.

Due to its central location, such microphone (EEG device) can register the cheering and booing of the crowd (brain activity) and tell you exactly at what timestamps (temporal resolution) noise levels went up (excitory postsynaptic potentials) or down (inhibitory postsynaptic potentials). In the course of any game, there are easily distinguishable patterns (neural oscillations). For example, as the crowds gather before the first whistle (sleep onset), the characteristic chatter of incoming fans becomes detectable.

No game is ever the same (nor is your recorded sleep brain activity). However, there are several ‘set pieces’ which reliably mark every game (sleep architecture). In fact, when looking at the audio recording (EEG data), you can determine how things unfolded on the athletic field that night across time (sleep staging). This is due to the occurrence of noise patterns (sleep cycles). Rather predictably (and owing to cyclic nature of sleep stages), you will able to identify the key events in relation to noise level : team warm up, last-second touchdown and the final whistle will all generate different levels of rowdiness (or lack thereof) from the fans. After the referee blows the final whistle and the spectacle (sleep) comes to an end, you might wish to check how long you have been in the stadium for (total sleep time).

However, even the best quality microphones may struggle to identify where exactly the noise is coming from (spatial resolution), and where the fans are located in the stadium (brain regions). This makes perfect sense- the avid stadium goer that you are, you can personally attest to the fluid dynamic of the crowd. Many fans hardly ever sit still- in fact, many of them like to move around (cerebral blood flow), or perhaps even migrate to a different zone. As the fans spontaneously shift from one place to another, so will the noise levels (that’s because cerebral blood flow and neural activity are coupled). How can you account for any such excursions?

If you were to be tasked with investigating (or mapping out) the exact make-up of migrating crowd based on an audio recording alone, you would understandably struggle. As you start tearing your hair out, your inner Sherlock tells you that therein lies the solution: you might indeed need to go BOLD! After all, the crowds need oxygen to live, be active and move around (and as such, are Blood Oxygen Level Dependent- BOLD).

fMRI BOLD- you are a magnet.

Functional Magnetic Resistance Imaging works by detecting changes in blood flow and oxygenation. Increase in neural activity is accompanied by an increase in oxygen consumption in the relevant brain region(s). In order to meet this demand, blood flow increases to the active area(s). Hemoglobin delivers oxygen to neurons via capillary red blood cells. fMRI Blood Oxygenation Level Dependent imaging technique accounts for fluctuations in blood oxygenation as they pertain to neural activity. As such, it allows to indirectly measure brain activity

The only catch? You need to be comfortable sleeping inside a large, cylinder shaped tube surrounded by a circular magnet. The cost of an fMRI machine is considerably higher as compared to EEG devices. Unfortunately, it’s not exactly portable, either. 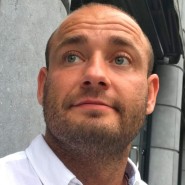 This website uses cookies to improve your experience while you navigate through the website. Out of these, the cookies that are categorized as necessary are stored on your browser as they are essential for the working of basic functionalities of the website. We also use third-party cookies that help us analyze and understand how you use this website. These cookies will be stored in your browser only with your consent. You also have the option to opt-out of these cookies. But opting out of some of these cookies may affect your browsing experience.
Necessary Always Enabled
Necessary cookies are absolutely essential for the website to function properly. These cookies ensure basic functionalities and security features of the website, anonymously.
Functional
Functional cookies help to perform certain functionalities like sharing the content of the website on social media platforms, collect feedbacks, and other third-party features.
Performance
Performance cookies are used to understand and analyze the key performance indexes of the website which helps in delivering a better user experience for the visitors.
Analytics
Analytical cookies are used to understand how visitors interact with the website. These cookies help provide information on metrics the number of visitors, bounce rate, traffic source, etc.
Advertisement
Advertisement cookies are used to provide visitors with relevant ads and marketing campaigns. These cookies track visitors across websites and collect information to provide customized ads.
Others
Other uncategorized cookies are those that are being analyzed and have not been classified into a category as yet.
SAVE & ACCEPT
error: Content is protected !!
KC-Performance